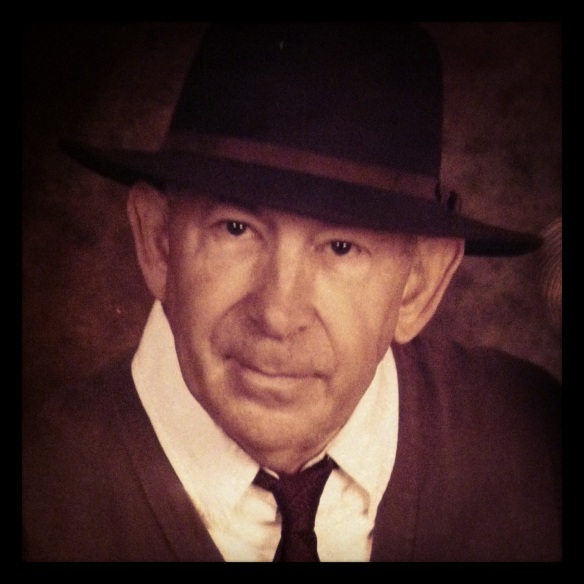 My dad died last week on Wednesday January 16th, 2013. Today I woke up thinking about how much I wanted the watch I gave him when I was 18 right after arriving in California for my first duty station in the Marine Corps. I inscribed on the back “to my precious daddy.” I want to hold the watch in my hands, feel the weight of it and remember his sweet side, his tender loving side that inspired me give him such a personal and expensive gift.

My dad is the little one on the right

Fathers hold so much weight in a daughter’s life. I remember many times sitting on pins and needles waiting to find out what my father would say about any decision in life. I remember he would take us shopping at the beginning of the school year but he would buy the clothes he wanted me to buy and I would let him just to make happy.  I joined the Marine Corps because he was really happy about it and signed me up at 17 years old. That was the same year his mother sent him off to the Army, only she was dying and didn’t want him around to watch. He didn’t know until he was called home on emergency leave to be with her just before she passed.

This was a defining moment in his life that colored the rest of his life’s decisions. He was devastated, heartbroken and alone after the loss of his mother, Lila. Perhaps this is why he struggled so much with his anger, his alcohol abuse and abusive nature towards us. He provided a wonderful home and food to eat but he was absent from a lot of our activities even when he was physically present. What none of us realized is that he suffered greatly from depression most of his life. His struggle with his mental health became ever apparent when I was a Junior in High School and he crashed deeply into a mental break down. He was unresponsive for days at a time just staying in bed, didn’t eat or drink for days and my mother cried for fear that he was going to die. He eventually recovered but he was never the same. It’s hard to put a finger on how he was different but he became even less involved in our lives and would get very emotional at times. It was as if he couldn’t handle a lot after that and needed to keep his world even smaller.

I believe my upbringing with my dad’s temper and trying to keep him from exploding helped me be the successful Marine that I was. The only problem was that pleasing my dad and the Marine Corps didn’t nourish the essence of me nor my desire to create, heal and be connected to nature. It really was an adapted behavior that I developed as a very young child and the funny thing is, I still struggle with what to wear and what is MY style.

I wrote in my book, The Art & Soul of Dancing Barefoot about growing up in two worlds:

The magical world we grew up in was made possible because of my dad’s absence. He allowed us so much freedom to run in the woods, chase deer, and build forts with his tools even. Most kids I knew in my neighborhood were not afforded such freedom. For his permissive parenting, I am very grateful.

Last week when I got the call that he wasn’t doing very well I knew immediately that I needed to go to him to say goodbye. Kristeen felt the same urgency and so did my brother. My brother and sister were in Sacramento so they began their journey across the bay as I drove to the airport to fly to San Francisco. We were all en route when he passed.  My only thought was, “No! He was supposed to wait, why couldn’t he just hold on a few more hours?” I crumbled into a heap in the airport terminal with tears flowing down my face.

After arriving in San Francisco it became clear to all of us kids that perhaps he did this intentionally knowing we would all be together and have to work somethings out. I pictured my dad with that mischievous grin on his face pretending like he didn’t know what we were talking about. You see my brother, Pony, hadn’t spoken to me in about three years because of something I did or did not do and then here we were and there was only one thing to do. Go to the pub! Share a drink or two and let the water flow under the bridge.

So we did. We hugged, laughed, cried, danced, toasted dad and cursed him. Kristeen toasted, “To a man who danced to his own rhythm, may he never step on our toes again.”

We tried to remember something good about him but all that would come were the sad stories of neglect, abuse and abandonment. Slowly though after a a day and a few hours or so we started remembering and we began to fill our hearts with light and love for this man that struggled so much in his life and ended finally feeling peace.

on his altar were tools, vintage cars, and a paint can and brush. His ashes will go in the paint can.

Kristeen and I worked on a Memorial Booklet for two days. We were telling the story of his life and that process walked us through so many memories, thoughts and possibilities for him – it’s always the journey in art that is the most profound to me. We didn’t even get the booklet finished (still working on it), but it didn’t even matter because my father’s death allowed us to end a legacy, release the pain, his pain, our pain and create a life that we can step into that is supportive, loving and nurturing. This is our responsibility for our children and their children to come. 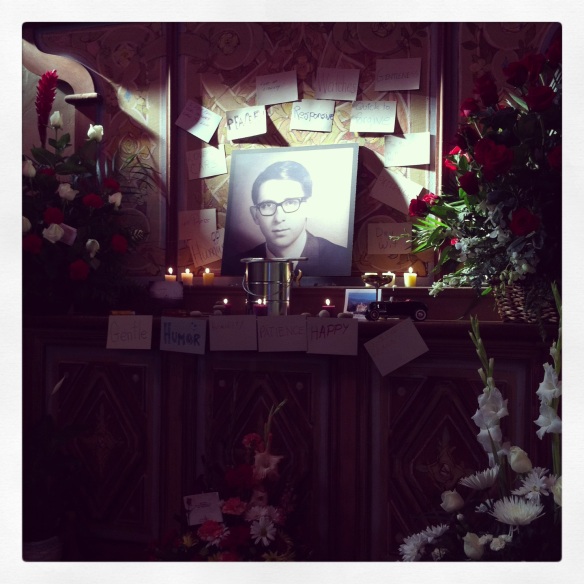 Everyone present shared an attribute that they appreciated in Paul

After the memorial service Kristeen and I drove out to Jenner beach and held a little ceremony of our own with the 20 foot waves and harbor seals bobbing up and down in the waters where the river meats the sea. We found two rocks each and then meditated on what our dad passed on to us that we wanted to release and what we wanted to keep close to us. I let go of the pattern of not being able to realize our dreams in their fullness I shouted this to the waves and then ran down to the waters edge and threw the rock into the sea. I chose to hold onto way of creating that was fearless and childlike with no desire to make it perfect but to simply create. We sat holding our touch stones and watched as the sun dipped into the ocean and then disappeared. 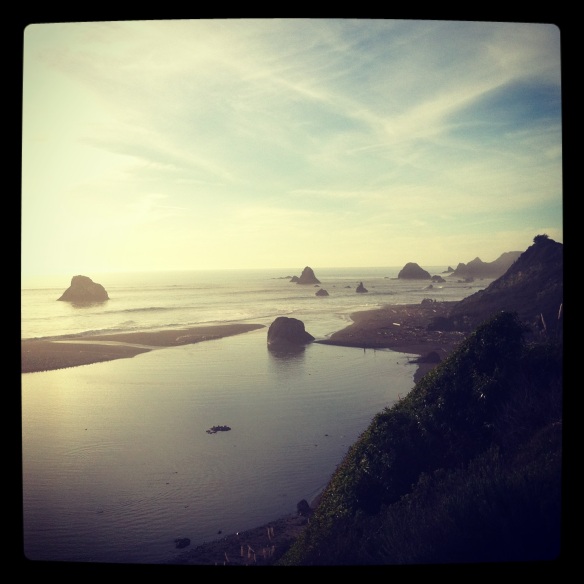 The Russian River flowing into the ocean

“For life and death are one, even as the river and the sea are one.”

7 thoughts on “The Legacy We Leave”